North 24thers took a field trip this weekend to see a retrospective exhibit of Judy Chicago’s work at the De Young Museum. In a surprising and welcome decision, the curators started with recent pieces by this feminist pioneer and moved back in time to her earliest creations.

The show begins with ceramic, glass, and needle works that grapple with mortality, environmental devastation, and the Holocaust. It ends with exultant and joyful bursts of color in Chicago’s “Women and Smoke” series from the early 1970s, spotlighting some of the performances she staged with nude women and colored smoke in the California desert.

I remember first discovering Judy Chicago as a teenager, when her show The Dinner Party opened in 1979 in San Francisco. The exhibit became a phenomenon, with its vaginal table settings that honored ancient female deities such as Ishtar and Kali, historical figures like Sojourner Truth, and artists such as Georgia O’Keeffe.

The sketchbooks and preparatory studies for The Dinner Party fascinated us, as did Chicago’s crediting of the many needle workers and volunteers who contributed to her projects over the years. The Birth Project, which followed The Dinner Party, drew female volunteers from the U.S., Canada, and New Zealand.

As someone whose most recent book focused on the experience of women working collaboratively with each other to fight a social injustice, I was moved by Chicago’s ability to inspire so many volunteers to come together to make art. Her joyful fireworks of brilliantly colored smoke were also a jubilant sendoff to the show. 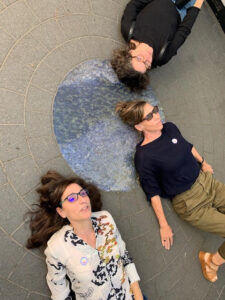