"Beauty plus pity - that is the closest we can get to a definition of art." - V. Nabokov … END_OF_DOCUMENT_TOKEN_TO_BE_REPLACED

Flavorpill ran this great piece, which makes me think these author-type people are the scariest most ruthless, and funniest, people on earth. (See Nabokov on Hemingway. And Dostoevsky) But this is the man who also wrote, "Beauty plus pity - that is the closest we can get to a definition of art." … END_OF_DOCUMENT_TOKEN_TO_BE_REPLACED 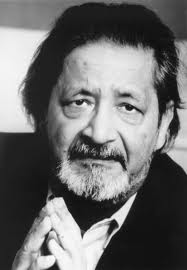 The Writers' Guild of Great Britain didn't want to "waste its breath" on VS Naipul's assertion that no woman is as good a writer as he is. I, however, don't mind wasting my breath, as I have a lot of it. I'll even pony up a few of my favorite words in response to Mr. Naipul's statements: demented, improvident, and delusional. The guy needs a testosterone cleanse. … END_OF_DOCUMENT_TOKEN_TO_BE_REPLACED

I’m afraid I read Trollope like some people read Barbara Cartland. I find the personalities and gossip as irresistible as reading about Arnold’s love child in Us Magazine. Only Trollope’s voice is funny and wry and you don’t have to look at pictures of stars with cellulite. His direct addresses to the reader are very 19-century Margaret Cho, if she wore a frock coat and couldn’t swear or talk about penises. Here is my blurb, if they’d had blurbs: “With finely wrought characters engaged in petty ecclesiastical and romantic intrigue, Trollope sets his characters in motion and lets them play out this witty and trenchant social satire…” I can’t put it down, until it falls on my face when I fall asleep reading it. Which hurts because it’s in a 791-page volume that includes Miss Mackenzie and Cousin Henry. … END_OF_DOCUMENT_TOKEN_TO_BE_REPLACED

Most women I know respect Philip Roth. In a certain way. Like the way you respect the guy who ate 59 hot dogs in 12 minutes. Roth has put out an amazing number of books over a long lifetime of writing. But still, a hot dog is a hot dog. I know there are women who like Philip Roth. A few. They acknowledge him as a very fine, and certainly prolific, novelist. Some of them even enjoy reading his books. (see: Karen Stabiner) But most women readers force his novels down so they can plausibly argue their case against that guy who keeps appearing at the kitchen table for breakfast, who claims to be their husband, but who must be an imposter, because they would never marry someone who likes Philip Roth. Then there are those who say they like him for the same reason you can’t really say, “Not really,” to the kid with the clipboard who stops you on the street and asks, “Would you like to help save the earth?” Michiko Kakutani, for example, reviews his books with uncharacteristically uninflected, seventh-grade-literary-essay-plot-summarizing blandness, as she does in her review of Roth’s Nemesis. This is the woman who wrote about Martin Amis’ The Pregnant Widow: “… the deliberately withheld secrets littered throughout this book only serve to underscore the lame storytelling and its reliance on cheap tricks.” But now, in a remarkable breach of Man Booker Prize-ish decorum (1) (2) Judge Carmen Callil resigned after the Roth win, saying that "he goes on and on and on about the same subject in almost every single book. It's as though he's sitting on your face and you can't breathe." It doesn’t need to be pointed out that the other two judges, Justin Cartwright and Rick Gekoski are male. This may have nothing to do with anything, but let’s just say, an author – Gekoski – whose Outside of a Dog: a Bibliomemoir, includes Germaine Greer as his only female subject, might be more inclined to like Roth than, say, 50% of all potential Booker Prize judges and 33.3% of this year’s Booker Prize judges. (About Justin Cartwright’s literary inclinations I have no information. And although that has never in my history prevented me from rendering an opinion, this is a respectable website run by otherwise respectable writers, so I’ll exercise the above-mentioned decorum.) In closing I would like to call upon the congregation to bow their heads in grateful prayer for David Foster Wallace’s 1997 New York Observer review of John Updike’s Toward the End of Time, in which he writes, “Mailer, Updike, Roth — the Great Male Narcissists* who’ve dominated postwar realist fiction are now in their senescence, and it must seem to them no coincidence that the prospect of their own deaths appears backlit by the approaching millennium and on-line predictions of the death of the novel as we know it. … END_OF_DOCUMENT_TOKEN_TO_BE_REPLACED